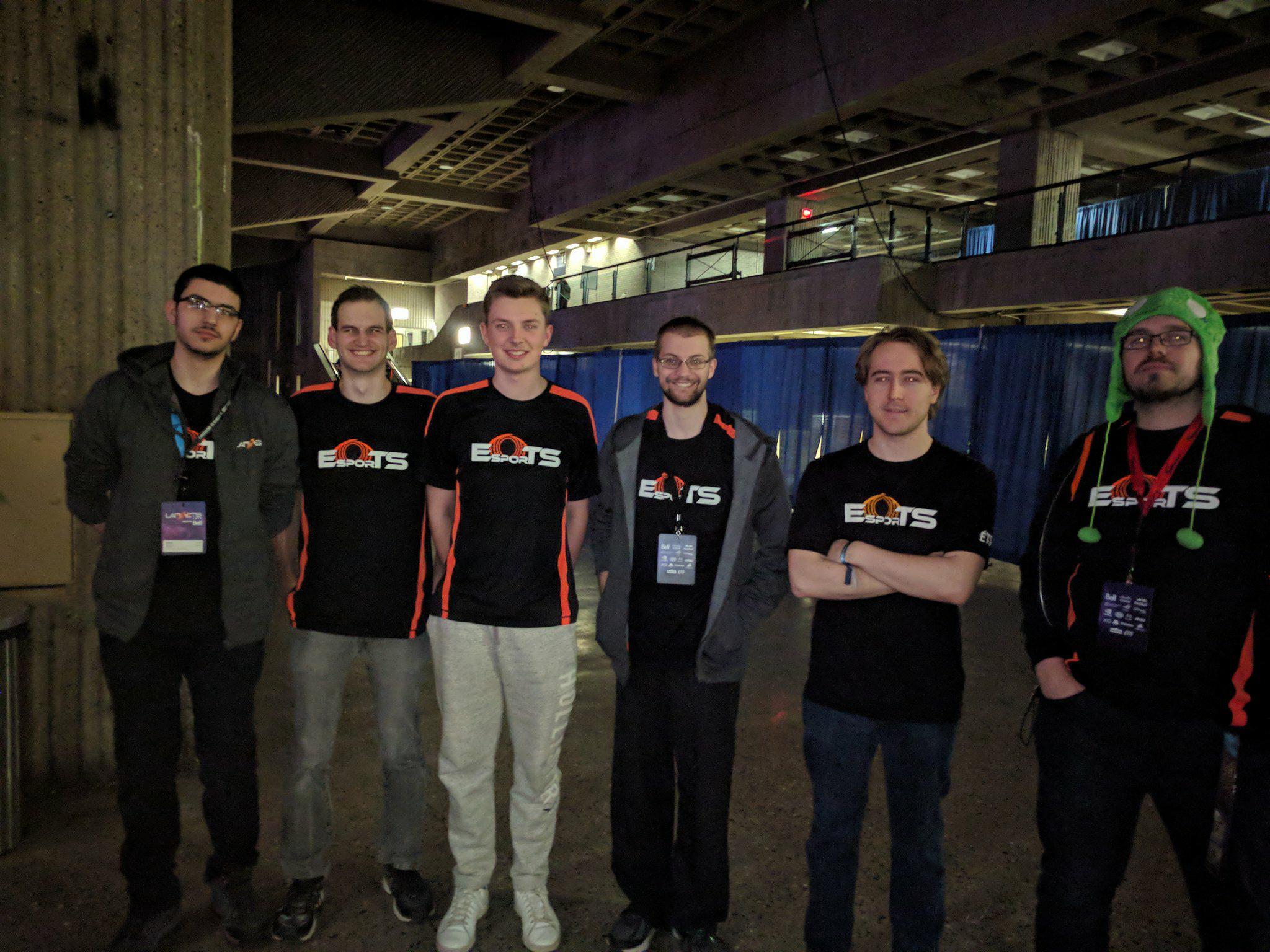 Lan ÉTS is the biggest LAN party on the East Coast of North America. It is organized by a bunch of students from the École de Technologie Supérieure. Their website can be found here.

EsporTS Frost is the Division 2 LoL team from the ÉTS. We're a bunch of students grouped together to participate in League of Legends competitions. We bought or tickets for LAN ÉTS back in November.

The competition is divided in two phases. First, all the teams are randomly drafted into pools of seven teams. After playing every other team in their pool, four teams are eliminated. The three best teams of each pool are then seeded in a Single Elimination bracket, to determine the winner.

Our first game was against that was slightly above our level. A few hiccups occurred during pick and bans on our side, leading to leaving a few power picks open. The biggest mistake I've made was that I somehow didn't save my runes, which left me with Dark Harvest on Lux. Comet would have helped secure a few kills and potentially snowball the game in our favor. I left the laning phase even instead of ahead, as I was lacking a lot of runes damage in trades. This allowed their winning top lane to not have anybody that could match, and their mid laner to catch a few teammates with well-placed Tibbers (and missed positioning from some players). A few lost objectives later, we were handed our first loss of the LAN. 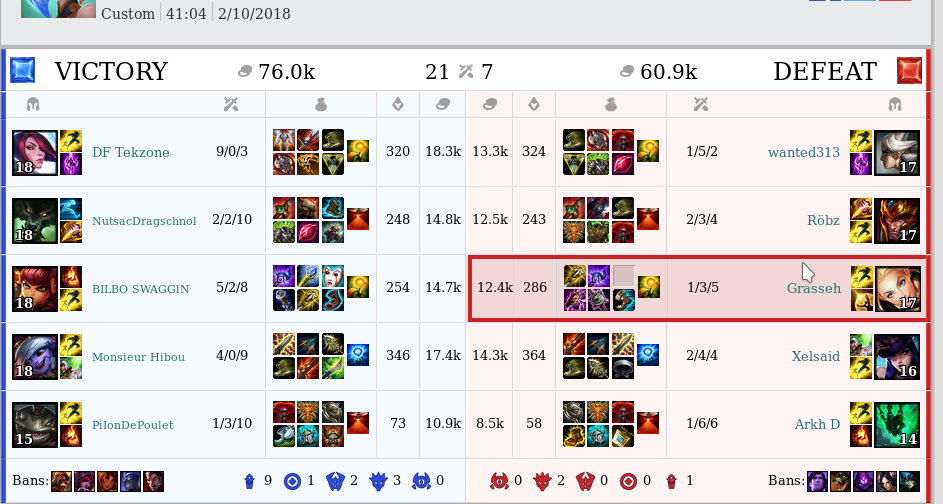 Our second game was against a lower-level team. I ended with three bans against me, but I still had a few cards up my sleeve. Not making the same mistake twice, I took the right runes. And it was necessary, as Azir is horrible to lane against. The level difference allowed a few bit lane ganks, our Tristana snowballed and we went on to any easy win. 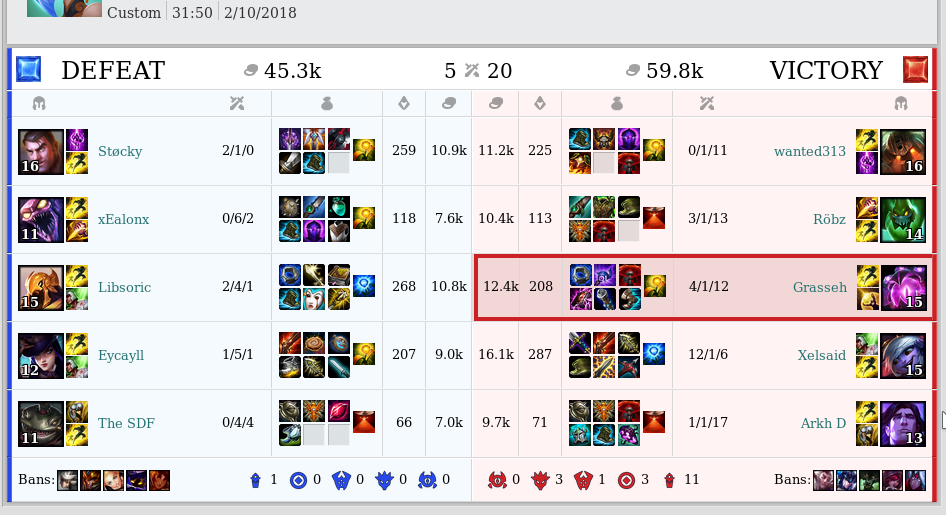 Our third game was against a team that was around our caliber. For the second time in a row, I drew three bans. I decided to go with Corki and while I'm not as comfortable on the pick as others, having good jungle proximity allowed me to start 3/0. Both teams were even for a while, until our top laner couldn't deal with the Nasus anymore. We had a hard time dealing with our macro-game to deal with the splitpush, got caught a few times during the rotation and allowed the other team to snowball through their top-lane pressure. It was a harsh loss, as we knew we didn't even go through our hardest matchup yet and were already 1-2. 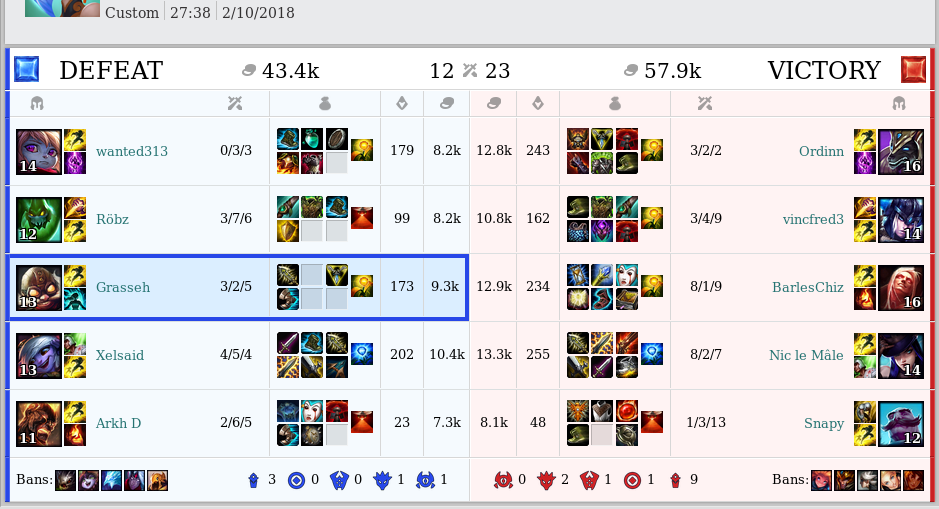 A common theme for the LAN was the three bans I was getting. Another slightly different draft phase lead to more mid-lane bans. This team was fairly below us in matchmaking ratings. I pretty much spent the game poking while my team was stomping the rest of the map. 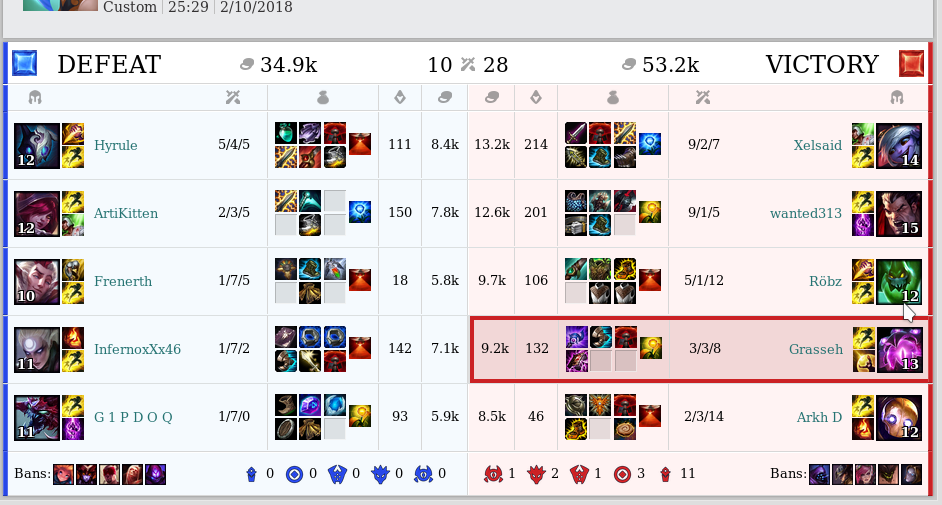 As the time of writing this article, we're on patch 8.4. But the LAN was during 8.3. That means Zoe was still good back then. And by still good, I mean really obnoxious to play against. The other team was fairly close to our level, and I grabbed early advantages in mid lane. I was able to convert my lead into an advantage for our bot lane, which proceeded to carry the close game. 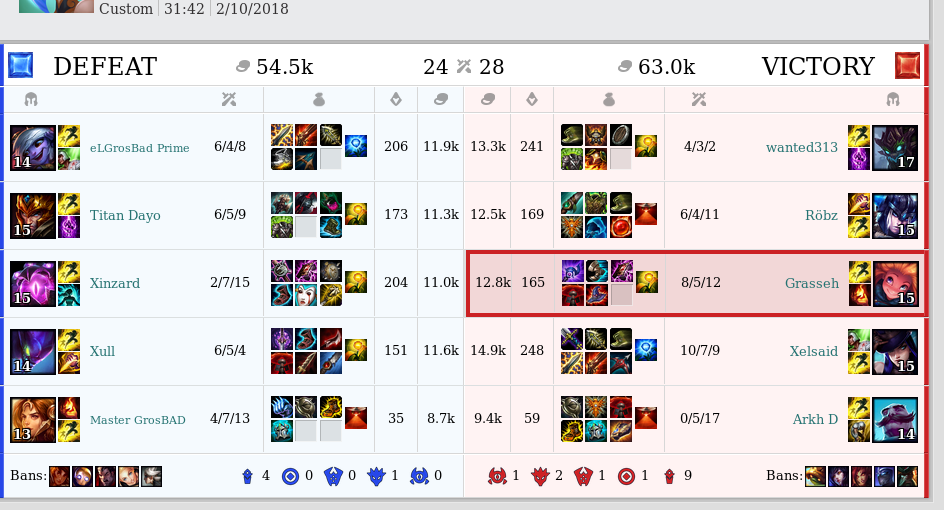 Welp, our final opponents were a squad of high Diamonds with a Challenger player. Way above our level. We ended with a satisfying team composition, and got in the game. The other team went for a nasty level 1 invade and a few communication issues lead to our jungler getting caught trying to invade back. I was first on the scene, trying to assist, but as we flashed over the dragon pit, we were followed by their level 2 mid-laner, who waited an extra minion to follow my roam, as well as both of their bottom laners. Two kills were given to their Challenger jungler in the 2v4, which lead to him styling on us for the next 15 minutes. We were able to get a good stall going, gather a few kills, until they just got serious, grabbed baron and ended the game. 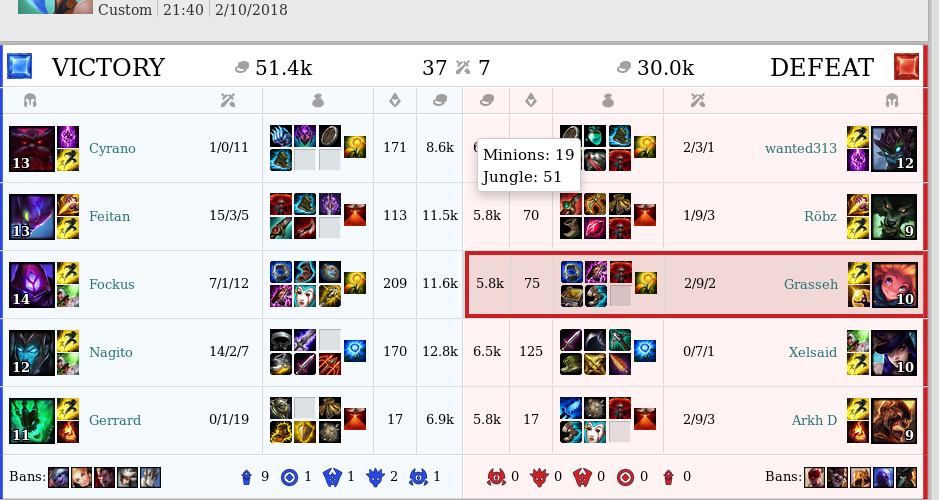 Ending our play-in phase 3-3, we ended in fourth position. As only the top three teams made it to the next round, we were directly eliminated. On the following day, the LAN organized a "Loser's bracket", which is a consolation tournament for teams eliminated early. It was a single-elimination bracket, but with best-of-three matchups instead of best-of-ones.

We started against UdeM's team, which I believe was the highest-rated team in the Loser's bracket. The first game felt like it was going well, I was having a fine matchup, got a few picks here and there, until I noticed my team was behind everywhere else. They then got caught by their Kassadin everywhere, which got fed and ran over the team afterwards. 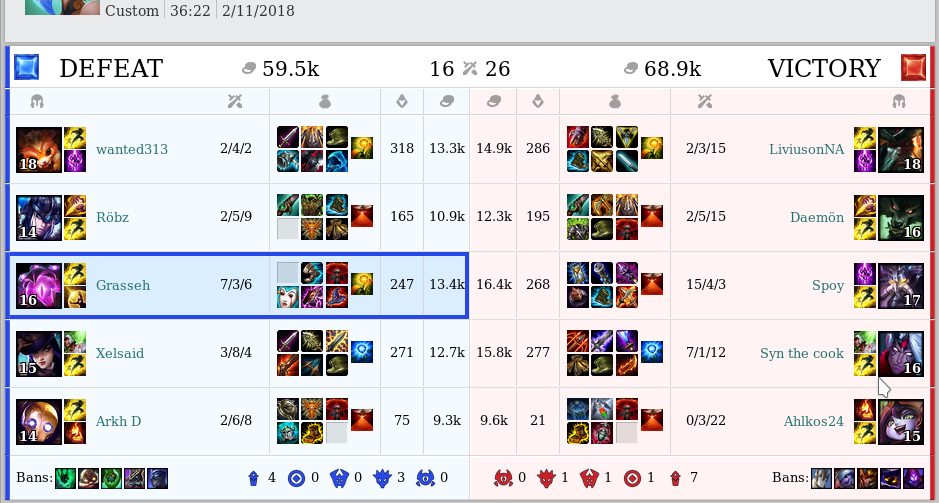 I believe we got hard-stomped this game. I don't remember much of it, as it just tilted me off for two reasons. One, I got hard camped. Two, they had a Janna. 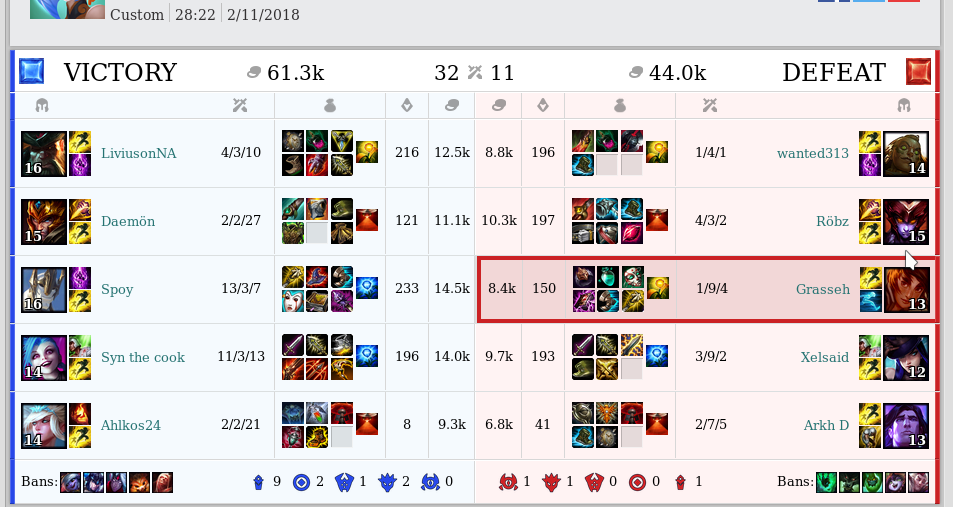 All together, we ended our weekend 3-5, with a few insights on our weaknesses. In my opinion, we have a distinct lack of chemistry during our pick & bans phase. I do the team scouting, and have a lot of disagreements with our team captain for ban priorities. I also believe he never looks further than his viewpoint as an AD Carry, as he wants to ban picks that disable him instead of picks that disable the rest of our team. Our support also has issues making quick decisions during the time he should make his champion pick. This may slightly be related to a lack of cohesion from the team on which pick should come when. I may also put too much importance in obtaining a mid counter-pick.

On the Rift, we have a few shotcalling issues. Some players do not communicate quickly enough the situations and others do not react enough either. My teamfighting positioning is slightly lacking, as I tend to not deal as much damage as I could if I lived on the edge. On the flipside, some players play too aggressive and get caught in a few situations.

We're currently working on a few of these points as the CSL season is ending and we're making a run for playoffs.